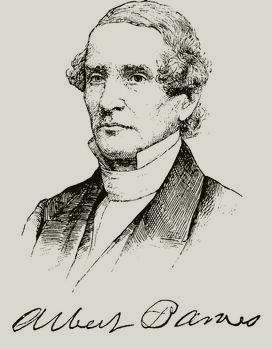 BARNES, Albert, theologian, born in Rome, New York, 1 December 1798; died in Philadelphia, 24 December 1870. He was graduated at Hamilton College in 1820, studied theology at Princeton seminary, was licensed to preach in 1823, and became pastor of the first Presbyterian Church in Philadelphia in 1830, where he remained until 1867, when poor health and partial blindness caused him to resign. His annotations on various parts of the Scriptures, originally prepared as lectures to his congregation, were published and attained a wide circulation, being adapted for the use of Sunday-schools. He was tried for heresy on account of certain passages in his commentary on the Epistle to the Romans, and was acquitted; but was advised to alter the phraseology of his notes, which was accordingly done. He was a leader of the new-school Presbyterians, when, soon after his trial, a definitive rupture occurred in the denomination. Of Barnes's "Notes " more than 1,000,000 volumes were sold before the last revised edition, in six volumes, was issued (New York, 1872). His other writings were " Scriptural Views of Slavery" (Philadelphia, 1846) ; " The Way of Salvation" (1863) ; " Manual of Prayers"; "The Atonement"; "Claims of Episcopacy" ; "Church Manual" ; "Practical Sermons for Vacant Congregations and Families"; " Closet Companion" (New York, 1854); " How shall Man be Just with God?" (1855); "The Church and Slavery" (1856); "Miscellaneous Essays and Reviews" (1855) ; " Way of Salvation Illustrated" (1856); "Inquiries and Suggestions in regard to the Foundation of Faith in the Word of God" ; "Life at Three Score" (1858) ; " The Atonement";" Lectures on the Evidences of Christianity in the Nineteenth Century" (1868); and "Prayers for Family Worship." The "Defence" that he made at his trial on charges of heresy has also been published (New York), and a report of the trial (Philadelphia). He published besides several volumes of sermons and a series of question-books for Sunday-schools. A collection of his " Theological Works" was published in New York in 1875.

Start your search on Albert Barnes.